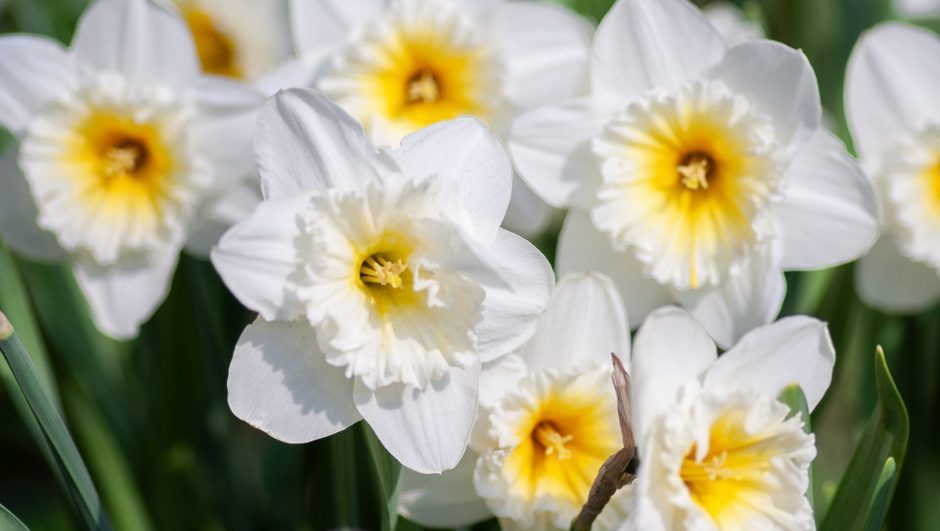 Beautifully bright and light, daffodils are the birth flower of the month of March. These blooms that remind us of sunshine and the coming summer are rich with symbolism. We’ve done a little digging (pardon the pun) to find out more about the meaning behind daffodils.

Where Do Daffodils Get Their Name? 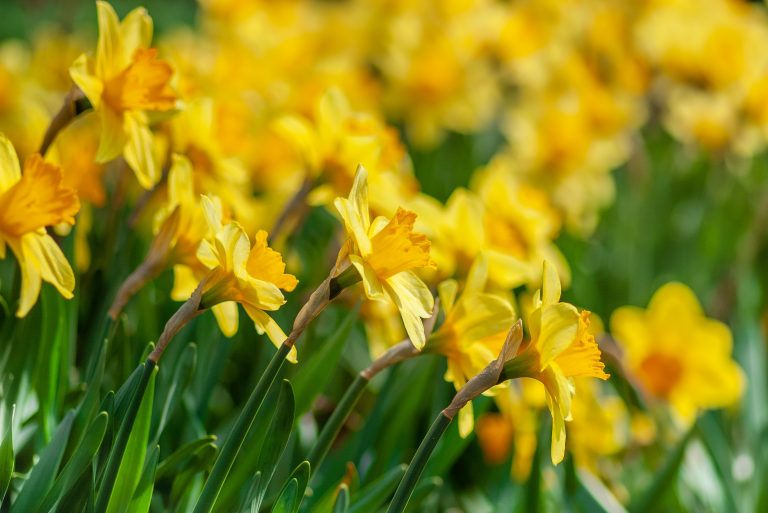 All daffodils are members of the specific genus of flora called Narcissus. While there’s a lot of confusion out there, they’re one and the same; if the plant is a Narcissus, it’s considered a daffodil as well.

The name hails from Greek mythology and takes from the tale of Narcissu,  a young hunter who had been blessed with drop-dead-gorgeous attributes. A water nymph fell madly in love with him, but he could not return her affections because of his intense vanity.

The nymph cast a spell on him, causing him to be so enchanted by his own likeness mirrored in the water’s edge that he eventually faded away at the very spot, leaving only daffodils in his wake. Other endings say that Narcissus was transformed into daffodils so that the nymphs could seek revenge or how he fell into the lake and drowned as he was so enraptured in his reflection!

Some people even like the way that daffodils bob their heads in the wind as Narcissus bends down to stare at his own reflection.

Either way, it’s a rather fitting name for a daffodil if you ask me. If you were a beautiful flower growing near a clear body of water, you’d be in love with dreamily watching your own reflection too!

Why Is Daffodil March’s Birth Flower?

In the Northern Hemisphere, March signifies the onset of spring, and daffodils are the first perennial flowers to bloom after a long, cold winter. They’re known to poke their heads up through the snow and to signify that winter has ended and sunnier months are ahead. 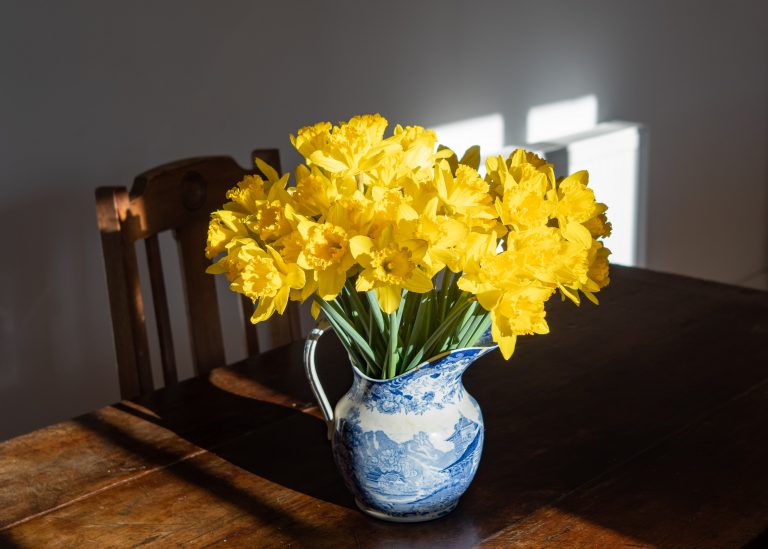 As a spring flower and the first to bloom, daffodils are symbols of rebirth and hope. They signify new life and resilience as they are strong little survivors who have weathered the winter storms.

In England, daffodils are also referred to as Lenten or Lent lilies as they bloom between Ash Wednesday and Easter.

The famous English poet William Wordsworth wrote a poem about daffodils. “I Wandered Lonely as a Cloud” pays homage to fields of these happy flowers.

Daffodil As A National Flower

The daffodil is the Welsh National Flower. Its flowering coincides with the first of March and St David’s Day, the patron saint of Wales. The flowers’ faithful blossoming year after year is equated to David’s faithfulness to his people.

In China, daffodils bloom around Chinese New Year and are a symbol of good fortune, good luck and prosperity. If these flowers bloom exactly on New Year, they mean good luck for the whole year ahead.

Daffodils As An Anniversary Flower

The American Cancer Society uses daffodils as its symbol as these flowers are ones of hope and rebirth. They symbolise hope for a cure in this context, and a sort of rebirth too.

Now you know what these flowers mean, find out what varieties are available:

Just as there are many different types of lilies, there’s more than just a few varieties of daffodil. In fact, there are more than 50 different species of Narcissus with over 25 000 cultivars. Colours mostly range from yellow, white and orange, but also come in some reds, pinks or even greens. The following three favourite varieties of daisies are best guaranteed to flourish all spring long:

The shortest of the Narcissus family looks luscious when grown in groves because of its fluffy, multiple-petalled, golden yellow flowers.

These flowers come in untainted yellows and are double daffodils that are a definite favourite with all the frills.

This exquisite variety has white petals with a double cup for a peachy trumpet in the centre. These flowers can grow up to 16 inches tall and may need stalking to prevent the flowers from weighing the stems down.

How to Grow Daffodils 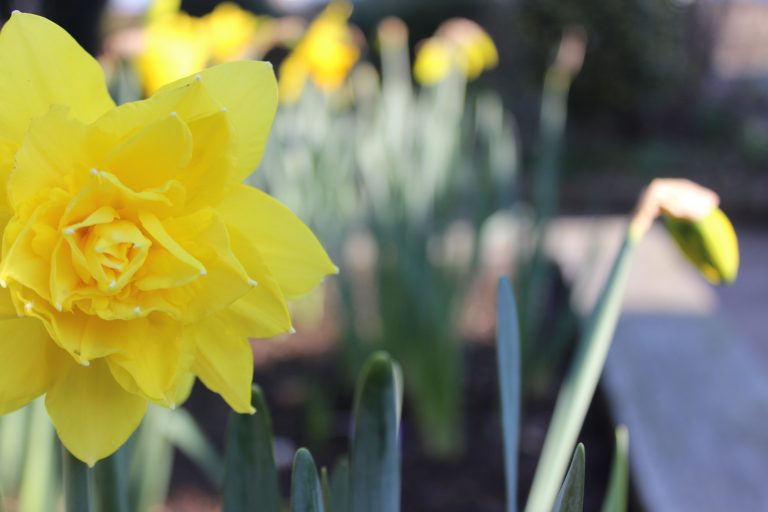 Bring the spring sunshine into your garden by planting daffodils by the handfuls this coming autumn. Here’s how:

During autumn, prepare a bed – with bulb fertiliser or bone meal – in a spot that’ll be nice and sunny come springtime. Bear in mind that certain varieties can also thrive in semi-shade. Soil should be kept moist, but certainly not too much so that it remains soggy, for these bulbs are susceptible to rot.

What Are The August Birth Flowers? Meaning Of Gladiolus & Poppy

When choosing bulbs, make sure they’re not dry, picking the plumpest ones you can find.

Bulbs ought to be planted two or three times as deep as the bulbs are long i.e., two-inch-long bulbs have to be planted five or six inches deep, give or take.

Taller daffodils grow better when bulbs are planted three to six inches apart from each other.

After securing bulbs in the ground, layer with approximately three inches of topsoil and water the bedding suitably well, and on a regular basis in early spring if the air is still dry after winter has come to an end.

Lift and divide clumps that become congested as this will minimise flowering, but replant immediately. They are hardy enough to bloom for decades either way.

Allow the daffodil plants to grow until they die off when summer comes, as this will allow bulbs to store energy and nutrients for the next spring blooms.

Well, that settles it then, no arguments necessary. Daffodils are definitely synonymous with sunshine, renewed energies and all the joy that comes naturally with spring!

Jump To a Section Below

Please be aware that we may receive remuneration if you follow some of the links on this site and purchase products.OkRead More